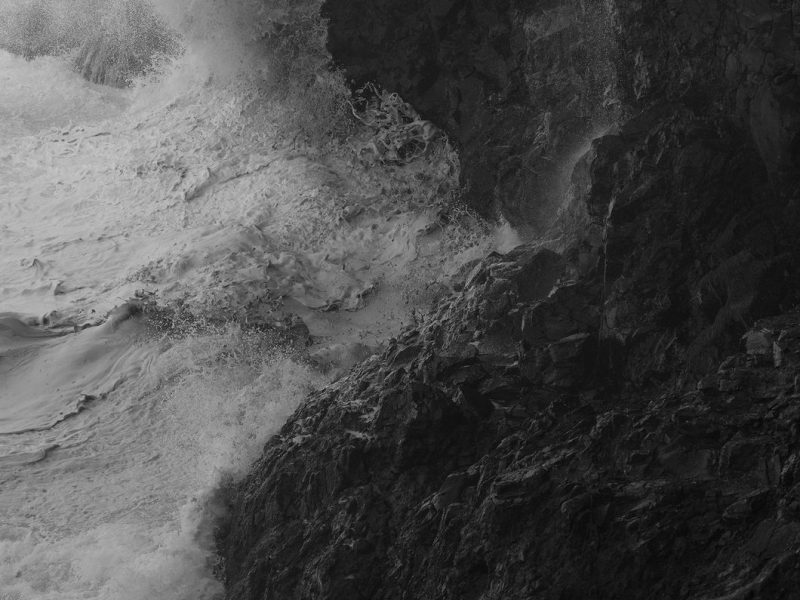 12 Hz—the lowest sound threshold of human hearing—suggests imperceptible forces, from plate tectonics to the ocean tides, from cycles of growth and decay in the forest, to the incomprehensibility of geological spans of time. The photographs in “12 Hz” allude to the ungraspable scale and veiled mechanics of these phenomena, while acknowledging a desire to gain a broader perspective, beyond the human enterprise, in a time of ecological and political crisis. “12 Hz” consists of images of lava tubes and flows, tidal currents, glacial ice and welded tuff formations: pictures describing the raw materials of the planet, those that make organic life possible. Many of these images were made in the state of Oregon in the western United States, from the high lava plains in the Deschutes National Forest to the gorges in the Cascades, and the sea caves and tide pools near Cape Perpetua on the Oregon coast. Having received a 2019 Guggenheim Fellowship to expand the geographical scope of this work, I have recently made images on the glaciers of Iceland, the lava flows of Kilauea in Hawaii, and in caves created by sulfuric acid in New Mexico. We are living in a defining moment, both politically and environmentally. By making photographs that propose something bigger than the human experience I hope to provide some perspective and a sense of scale. There is nothing explicitly political or moralistic about this work, but it comes from an acute awareness of our perilous course as a species and the ever-mounting consequences of our arrogance and unchecked consumption. Through photographs of subjects that suggest change on a level that falls outside the limits of our perception, I aim to explore the overlap of beauty, awe and pathos. By stepping back to look at the larger system of flux—of which we are only a small part—I want to find my own pulse, as it were, and assert an appropriately scaled sense of being within the hierarchy of this system.

Ron Jude (b. 1965, Los Angeles) lives and works in Eugene, Oregon, USA. His photographs have been exhibited at numerous venues including The Photographers’ Gallery, London; Daugeu Cultural Center, South Korea; Museum of Contemporary Photography, Chicago, Les Rencontres d’Arles, France, and the Getty Museum, Los Angeles. He is the author of ten books, including Alpine Star, Emmett, Executive Model, Lick Creek Line, and Lago. His forthcoming monograph, 12 Hz, will be released in September of 2020 by MACK. Jude is the recipient of a 2019 Guggenheim Foundation Fellowship and is represented by Gallery Luisotti in Santa Monica and Robert Morat Galerie in Berlin. He currently teaches photography at University of Oregon.