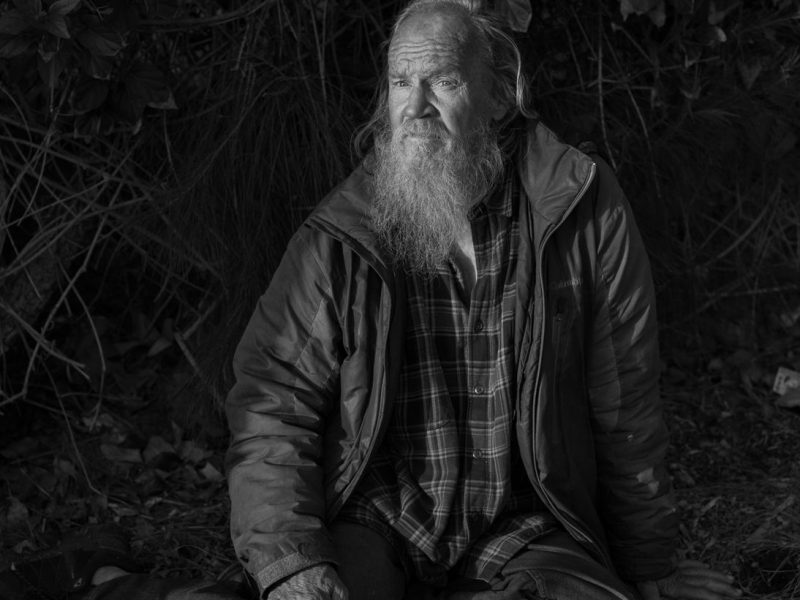 Driftwood A shattered window calls out the dawn, crows caw to gather their kin as crumbs leftover from the fire rest beneath the trailer hinges. The hearts of nature’s beasts are slow to sleep, the moon always watching, a companion of sorts for the parasites of the land, the herds of mankind, flocking to watering holes— clamouring to no avail. I’m thankful for the veiling night. Flowers rest tenderly atop piles of dirt, decayed, a sort of sad pale like pieces of driftwood washed ashore. The photographs in Driftwood were taken between 2016 and 2020 in Riverside County and the western side of the California desert, particularly small pockets and communities tucked behind the Morongo Reservation. Some of the individuals portrayed in Driftwood live life wandering without a permanent home. Many live isolated lives, communicating with as few people as possible, and doing just enough to get through the harsh desert conditions of the everyday. The right to capture the subjects in many of these photographs was given in exchange for a pack of cigarettes or a liter of soda from the local Country Mart liquor store. While making these photographs, I was introduced to things that were altogether unfamiliar to me: bible study, fruit orchards, arsonists, stories of abandoned twin brothers. I became close to those who have come to be known in those parts as the “black eyes”. I constantly ask myself what draws me back to the desert. Perhaps it is the geography—the feeling of vast openness after all my city years. Or maybe it is the people that seem to care about nothing except for what is directly in front of them—the ability to fit every serious thing into so much less. Or maybe it is the conversation between the people and the land—how they speak to each other about freedom and hope.

Kovi Konowiecki (b.1992) was born in Long Beach, California, and has spent much of the past five years between Los Angeles and Mexico City. He holds a BA in Media Communications from Wake Forest University and an MA in Photography from University of the Arts London. After playing professional soccer in Europe, he turned to photography as a way to document the things around him and shed light on different aspects of his identity. Kovi was selected to be a part for the Taylor Wessing Photographic Portrait Prize in 2016, 2018 and 2019, and was the first ever nominee to have two images shortlisted for the first place prize. He was also an honourable mention for the 2020 Hariban Award (Kyoto, Japan), and was a Red Hook Labs New Artist in 2018. Kovi has been featured and published on platforms such as The New Yorker, British Journal of Photography, i-D, The Guardian and The California Sunday Magazine, amongst many others. Kovi has exhibited his work in galleries and museums such as ROSEGALLERY (Santa Monica, CA), Salut Au Monde! (Porto, Portugal), and The National Portrait Gallery in London. In 2018, Kovi co founded a small publication, Mula Press, to explore his love for book making and to publish personal projects and special artist editions. Kovi is working on his first monograph with Deadbeat Club Press, which is set to release in Winter 2021.