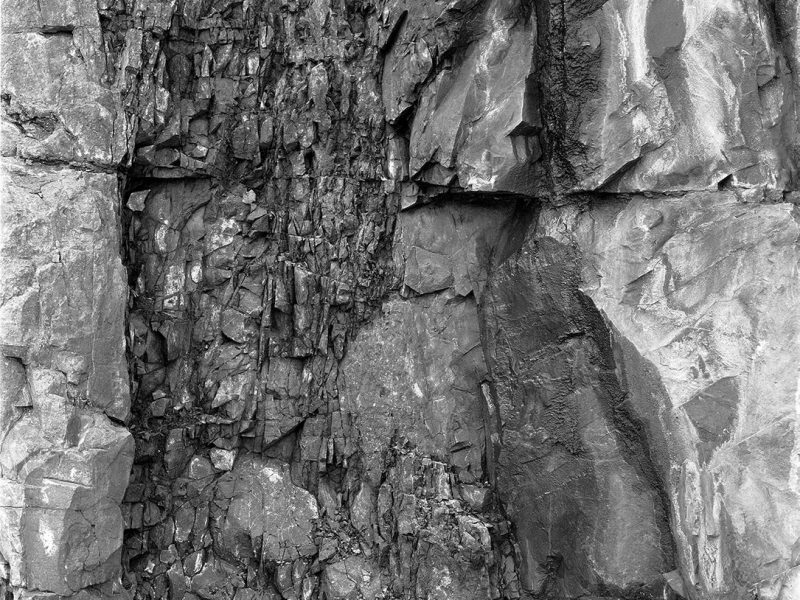 In Western art, the representation of landscape has long been linked to the inscription of a boundary between culture and nature. Even work that engages with landscape as a human-made space often makes use of pictorial conventions historically linked to the depiction of natural environments. Cuts explores and challenges these conventions. I think of these photographs as landscapes, although they evade easy categorisation as either natural or human-made, and they unsettle the controlled space of the landscape view. The rock cuts in these images are the result of blasting with dynamite in order to build infrastructure such as railway lines, roads and reservoirs. The fracture patterns created by such explosions are uniquely ‘unnatural’ – traces of a powerful intervention brought about by human agency rather than natural processes. The living rock that is exposed by blasting would otherwise have remained hidden for millions of years. There are no horizons in these photographs, no deep space, no easily identifiable scale – they resist the order that the camera seeks to impose. And although they don’t resemble conventional landscapes, they possess a similar power to evoke the ambivalence that surrounds our present relationship to the planet and its ecology. Rock is a primordial element, its timeframe utterly unrelatable to that of a human lifespan. Yet this duration can be ended in an instant. The photographs in Cuts are both celebrations of human enterprise, and monuments to acts of violent disruption. Shot in the mid- to late 1990s on 5×4 and 10×8 sheet film, only one of the images in this submission has made it past the contact print stage; several have never been printed at all.

Eugenie Shinkle originally trained as a civil engineer and worked in this field for two years before returning to university and completing a BA in Photography and Art History, followed by a combined MA in Photography, Art History and Landscape Anthropology (both Concordia University, Montreal, Canada), and a PhD in Philosophy and Fine Art Media (Slade School of Fine Art, London, UK). She was approached by an agent shortly after completing my BA, and exhibited her photographic work widely for about five years before withdrawing from the art world. Since that time she has built a career as an educator and writer on photography. Eugenie Shinkle currently teaches photographic practice, history and theory at the University of Westminster in London. Although she stopped exhibiting her work publicly around 2000, she has never stopped taking photographs and has recently resumed an active art practice. Her archive also contains thousands of negatives. Her training as an engineer has had a profound effect on the way that she approaches photography. All of her photographic work is concerned, in one way or another, with ideas of space and structure – with the way that the world is put together, and with the role of the camera as an active agent in its construction.