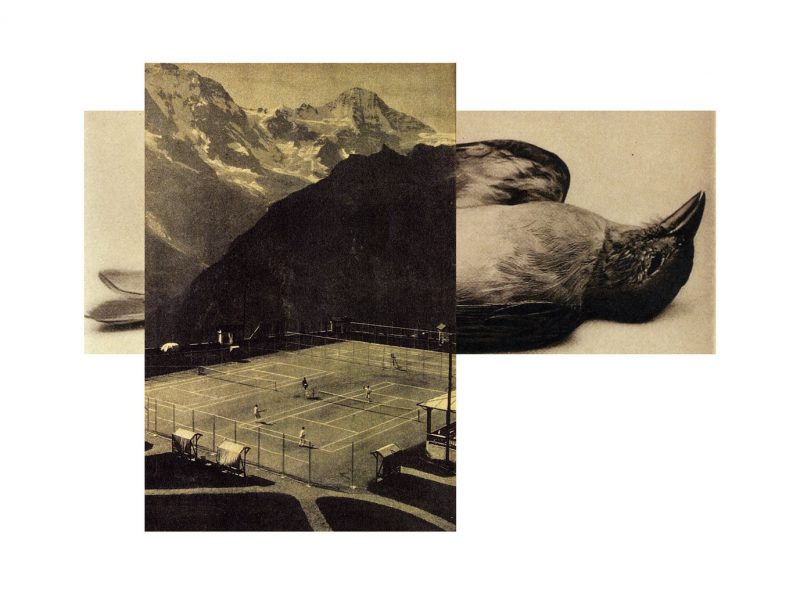 In my work, I create archives. I tell historical stories with collage, altering and re-contextualising historical images. I’m most interested in the Weimar time period in Berlin, Germany, a time period in which gender roles became more fluid, and a period that we currently view with the shadow of its future cast over it. In a sense, I am not a traditional photographer – I rely on archival images rather than my own camera. But the identity of my work is rooted in photography, and my manual processes engage with its history. My stories do not have an obvious progression in plot – instead I create an atmosphere. In Through The Eyes of A Nightbird I employ illusions to conjure up hazy characters, never allowing for any one of them to be easily labeled as a hero, a villain, or a victim. Animals, particularly birds, are a recurring motif in my work, echoing the shapes of the human body and adding a layer of mystery. In creating distance between the viewer and the characters, I respect the multiple viewpoints within each story, and the layers of a story that is told several times over. . Through The Eyes of A Nightbird can most accurately be described as stories about photography. I explore threads that run through its history: voyeurism, documentation, patriarchy, sexuality. I am mindful of the power of the medium, and my work raises a question at its core: who owns a photograph – the photographer, the subject, the archivist, or the viewer?

Ronit Porat was born in Kibbutz Kfar Giladi, northern Israel, in 1975. She holds a Master’s in Fine Arts from the Chelsea School of Art and Design in London, and a degree. in Photography and Digital Media from the Hadassah College in Jerusalem, which she completed with Distinction. Porat works in the medium of photography, and includes archival materials and biographical texts in her installations. Her work was exhibited internationally in group and solo shows, like Museum Van Loon, Tel Aviv museum of art and the City Museum of Cologne. Porat is Recipient of the Lauren and Mitchell Presser Photography Award for a Young Israeli Artist, 2017, Artis Grant Recipient for 2016, she received the 3Package Deal – Grant by Amsterdam Fonds voor de Kunst (AFK) and Bureau Broedplaatsen (BBP) with Castrum Peregrini, De Oude Kerk, Museum van Loon, Amsterdam, the American-Israel Cultural Foundation Grant twice between 2002 and 2004, the Ted Arison Family Foundation Scholarship for Emerging Artists in 2012, and Israel’s Ministry of Culture and Sport Creativity Encouragement Prize for 2013. She participated in several artist residency programmes, including: Hotel Pupik (Austria, 2007); SVA Summer Residency (New York, 2008); ARTPORT Residency (Tel Aviv-Jaffa, 2013); Keret House Artists’ Residency (Warsaw, 2013); and Castrum Pergrini (Amsterdam, 2014); Reitir (Iceland, 2015). Porat is a member of the collective Indie Photography Gallery since 2010.

Through The Eyes of A Nightbird