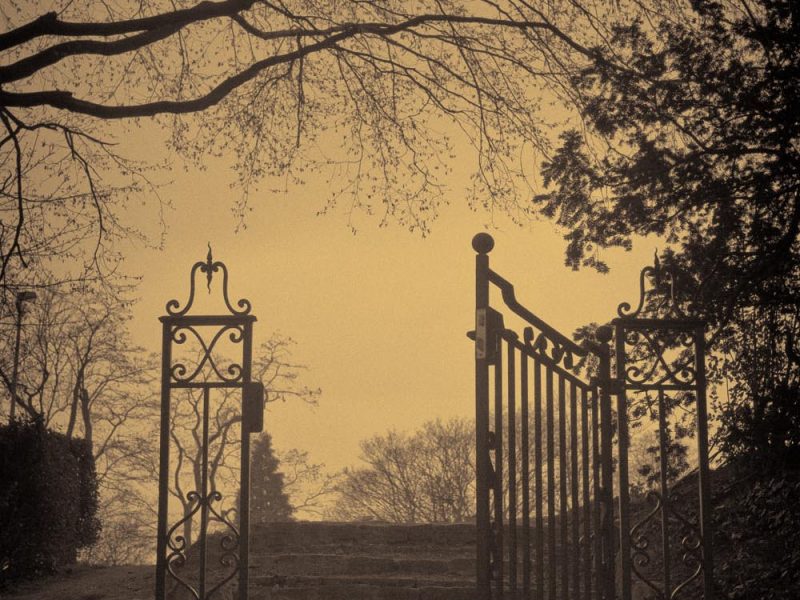 I was interested in her work because it looks like classic photo technique calotype. From a collotype artisan point of view, this work can be beautiful collotype print when it’s in monotone. However, it’ll be even more effectively printed when it’s in double-tone of sepia and black as the original. Very beautiful work, indeed.

Olga had always been intrigued by intangible matters such as time. She went on to study history and obtained her master’s and then PhD degrees in the Mediaeval and Early Modern history and did research in Renaissance culture. Training as a historian involves analyzing available data, texts and artifacts to construct an interpretation (or shall I say, the picture?) of foregone reality. This makes you feel mentally present in different realities simultaneously and urges you to contemplate on the limits of perception and the role of imagination in our worldview.

This approach inspired the “Portals” series. It is a journey through a labyrinth of imagined realities, space and time dislocations. Entryways to other universes appear in our mind as we invite and invent them. Ultimately, the series is about a travel through the realm of subconscious.

The intense golden light recurs the antique ambrotype aesthetics to suggest a departure from the ordinary and contemporary. At the same time it is inspired by the Orthodox symbolism. In Byzantine tradition golden colour represents light in its metaphysical sense. This light is invisible to senses. It transcends the reality and appears before one’s inner eye through contemplation. It stands for illumination and epiphany.

The “Portals” refer to the symbolism of golden light as representing the filter of contemplation. It marks human self-consciousness with its urge for personal meanings and ability to evoke virtual worlds. The amber filter suggests the inner space where we can meet and confront ourselves.

The series is based on modern-day visual encounters reinvented within a viewer’s mind. It is essential that all scenes are presented as they were originally seen. No objects were added or removed in post processing, photo manipulation being limited to the antique esthetics.

“Portals” is an ongoing project. The photos were made at various locations across Europe: in the Netherlands, Belgium (Belgian Ardennes being a particularly inspiring region), France, Austria, Germany, and more.

Images from the series had been exhibited internationally and received several awards and nominations.

Olga Rook was born in Moscow and later moved to the Netherlands. Before turning to photographic art she obtained her master’s and PhD degrees in History and specialized in Renaissance culture. She believes that a historian’s training in focusing on the hazy texture of remote time while being grounded in the present moment helps her expand the borders of everyday perception. Her photography is about the hidden side of everyday life – the symbols, meanings and illusive worlds discovered and constructed through reflection and imagination.